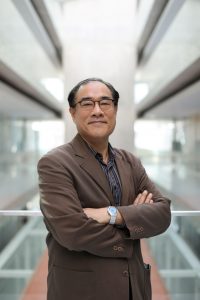 The world’s most widely used lithium-ion batteries can be found in almost every electronic device, from phones to cars. Modern batteries are designed to last as long as possible, but not every user knows how to extend their cycle life. Hyeong Jin Kim, a professor at the Gwangju Institute of Science and Technology (GIST) who came to KTU, said it was important to charge electronic devices before the energy level drops to near 0%.

Professor Kim from South Korea, who specializes in the field of lithium-ion batteries, says Li-ion batteries are shrouded in various myths. One of them is to fully discharge the battery before recharging.

Manufacturers of various smart devices suggest keeping phones, computers, and other devices charged at least half the capacity of the battery because a constant lower level of power causes the battery to wear out. Professor Kim agrees with this statement and points out that in order to preserve the longevity of the Li-ion battery, it is important to monitor the energy level during the day and prevent it from falling below 20%.

“When energy levels fall below 20%, it damages the Li-ion battery, and while this damage is not significant, it adversely affects battery capacity. Then the set number of battery charges is reached faster, and the battery has to be replaced.” says the professor.

The scientist, who has worked for more than twenty years at the world’s leading Li-ion battery plant for the automotive industry, LG Chem Michigan, USA, recommends maintaining the energy level of electronic devices at 50-100%.

“Imagine we have a phone that can be recharged up to 100 times – every discharge from 100% up to 0% reduces battery’s capacity by 1 percent. If we discharge the phone to 0% each time before charging, the remaining battery capacity will be 1% after 99 charges. However, if we charge the phone before the battery level reaches 50%, the battery charge limit will extend to much larger than 200 cycle number,” explains Kim.

Conventional telephone batteries often reach 80 percent capacity after 500 charges, and batteries with significantly higher life spans are used in the manufacture of electric cars, electric buses, and other devices.

“We probably all know Elon Musk’s Tesla brand, which makes electric cars. Nowadays the capacity of electric car batteries developed by some companies is at least 90% even after 1000 charges. Although batteries for electric cars differ greatly from batteries for phones not only in size but also in other components, both operate on the electrochemical principle of lithium-ion,” recalls the researcher.

“Nickel-metal hydride (NiMH) and nickel-cadmium (NiCad) batteries used in the past have been extremely toxic, and the use of certain materials utilized in those batteries now is strictly regulated by the European Union. The production cycle of a lithium-ion battery consists of the mining, refining, oxidation of various metals, and while these materials are not harmful, the chemical treatment and battery manufacturing process is not entirely environmentally friendly. Certain metals used in production are not renewable, their resources are limited, and recycling of other elements is not always possible,” notes the academician who came to the Kaunas University of Technology.

In order to reduce the negative impact of lithium-ion battery production on the environment, the recycling of specific materials is also encouraged by global societies. The EU Parliament alone expects to recycle 65% of all lithium-ion batteries by 2025, including 35 percent of used lithium and 90 percent of nickel, copper, and cobalt.

“There are, say, several billion phones in the world, and lithium-ion batteries are inside of every one of them. Expensive materials such as nickel, cobalt, lithium etc. used in the manufacture of telephone batteries can theoretically be recycled, but in practice, the process is very costly and not always worth the price. Therefore, it is important to find ways not only to improve the functionality of batteries but also to reduce their ecological footprint,” says Kim.

Due to the limited resources of the metals used, researchers are looking for alternatives to lithium-ion batteries. The efficiencies of the alternatives discovered so far are lower, but this gap is expected to narrow in the future.

To KTU – from South Korea

The professor who is visiting KTU came to Lithuania thanks to Professor Sigitas Tamulevičius, Director of the Institute of Materials Science. The cooperation began by an unexpected meeting during an event abroad, and after almost three years, a South Korean scientist came to Kaunas to spend a year researching the application of laser technology in the development of high-performance lithium-ion batteries.

“I met S. Tamulevičius during a conference held in China almost three years ago. I was very interested in the professor’s research field and its application,” he recalls, “so when I had the opportunity to come to KTU and spend a research year adapting laser technology in my field of science, I took advantage of it.”

The professor of the Institute of Integrated Technology hopes to visit not only Lithuania but also the surrounding countries such as Poland in which LG Energy Solution Wrocław lithium-ion battery plant is located. Although the professor did not yet have the opportunity to see all the famous places in Lithuania, Kaunas left a great impression on him.

“I am very happy to be in Lithuania and to be able to learn more not only about KTU and the field of science that interests me, but also to get to know the country’s history, culture, and language. During this year, I would like to visit other Baltic countries – Latvia and Estonia,” plans professor Kim.

Meeting of the MEra-NET project

Reception at the Institute for guests from Taiwan

The doctoral dissertation was defended at the Institute of Materials Science

Seminar series with Prof. Dr. Raymond C. Rumpf of the University of Texas at El Paso at the 24th International Conference-School

Invitation to NIBS 2022 conference in Riga

MMI collective congratulates all of THE KTU community

A new doctor in Institute of Materials Science

Phd. Students Between the Best of the Best in International Conference-School „Advanced Materials and Technologies 2019“